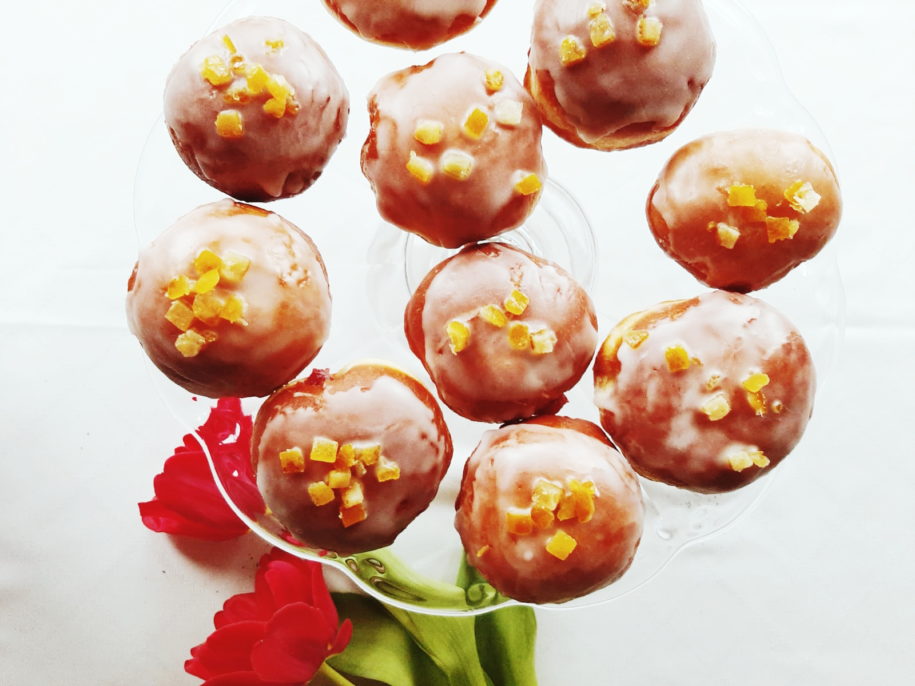 The last week of Carnival hast just started! What does it mean in Poland? FAT THURSDAY is coming and we simply go nuts for… doughnuts!

‘Tłusty czwartek‘ is the last Thursday before the beginning of Lent. It is said that you will have bad luck for a year if you don’t eat at least one doughnut on Fat Thursday, so since the 16th century Poles eat on that day as many doughnuts as possible.

Overindulging in the name of luckiness or simply another reason to celebrate food!

Doughnuts are a national phenomenon. You can be sure to find them in every bakery, supermarket or coffee shop and to see people waiting for hours in queues to buy crazy amounts of ‘pączki’, which are then offered to family or friends. Can you imagine that on Tłusty Czwartek statistically every Pole eats two and a half doughnuts, what makes 100 million of doughnuts eaten by the entire nation?

The most traditional ‘pączki’ are filled with wild rose jam, but you can find them in countless variations – with advocaat custard, plum jam, or chocolate, topped with icing or sugar. Yumm!

Another typical treat of Fat Thursday are ‘faworki’(or ‘chruściki’), called also angel wings. These are delicious little crisps of pastry shaped into twisted ribbons, deep-fried and sprinkled with powdered sugar. So worth to try!

‘Pączki’ taste best homemade and fresh, so we encourage you to take up the challenge and make them yourself! Below you can find the traditional recipe for Polish doughnuts from the half century old cookbook “Kuchnia polska”, which is being used in our home for years!

Mix the yeast with 1 tablespoon of sugar, 200 g flour and milk. Leave in a warm place to rise (for about an hour). Whisk the egg yolks and egg with sugar until it’s white and fluffy, add sifted flour, yeast starter, vanilla extract, lemon zest and juice, the rest of the milk, salt, alcohol, and knead the dough by hand for about 10-20 minutes. The dough should become smooth, shiny, and should not stick to your hand anymore. Start adding the melted butter or oil and keep kneading for a bit more. The dough shouldn’t get too thick. Place the dough in a large bowl, cover with a kitchen towel and let it rise in a warm place. In the meantime start heating the lard or oil in a narrow pot on medium heat til it reaches 180℃.

As soon as the dough double its volume, put it on the moulding board with flour and roll out to a about 1,5-2 cm thickness. Divide the rolled out dough into 2 parts. On the first part cut out circles with a glass or a metal can. Put a teaspoon of marmalade or other filling in the centre of every circle. On the second half, cut out the same circles of dough, put them on circles with marmalade, squeeze your fingers thoroughly around each circle, cut out the donuts, put them on a board covered with flour and leave in a warm place to rise.

Place the risen doughnuts onto hot grease. Fry them until they turn brown, for about 2 minutes on each side. Place them on a paper towel to drain. After cooling, sprinkle with powdered sugar or cover them with icing.

You can find out more about which cookies we are using or switch them off in settings.

This website uses cookies so that we can provide you with the best user experience possible. Cookie information is stored in your browser and performs functions such as recognising you when you return to our website and helping our team to understand which sections of the website you find most interesting and useful.

Strictly Necessary Cookie should be enabled at all times so that we can save your preferences for cookie settings.

If you disable this cookie, we will not be able to save your preferences. This means that every time you visit this website you will need to enable or disable cookies again.